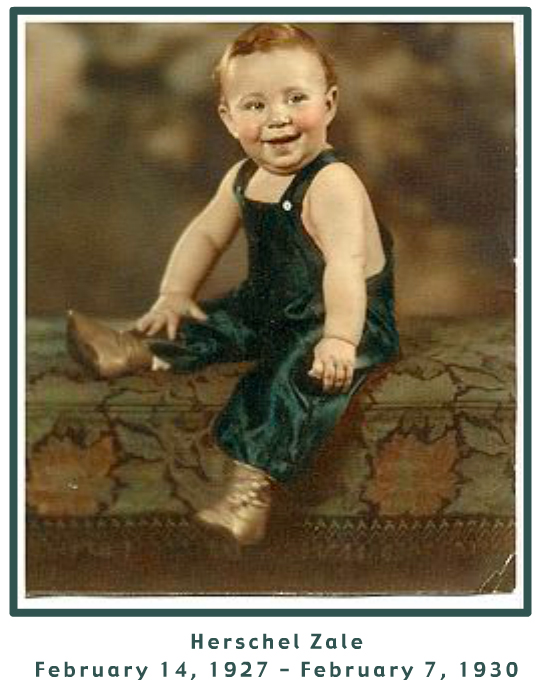 The first-born child of M.B. and Edna Zale, Herschel, died of diphtheria one week prior to his third birthday. A widespread and greatly feared disease, diphtheria struck many families in the 1920’s and 1930’s.

More than fifty years later, when asked about their early charitable work, M.B. recalled the death of their beloved son, Herschel. There was an insurance policy on the family and the young couple received a small check as a result of Herschel’s death. M.B. and Edna decided to donate the insurance proceeds to a local Wichita Falls, Texas child care center devoted to the care of poor black children, the Colored Day Nursery.

At the time, another organization, the Wichita Falls Day Nursery, served poor white children. After many decades of serving chilldren from low-income families, these two organizations merged in 1973 and have continued to operate as Child Care, Inc.

The original location for the Colored Day Nursery burned in 1975. The children who had been served at that location were moved to one of the original centers for the Wichita Falls Day Nursery at 403 Lamar Street. Built in 1925, the Lamar Street Center was still being used as a childcare center for low-income families.

In 1998, the Directors of the M.B. and Edna Zale Foundation discovered that the Lamar Center, serving more than seventy children a day, was badly in need of renovation. The Foundation’s grant in the amount of $100,000 sparked additional grants from the city of Wichita Falls and others. Major repairs and improvements to the Lamar facility were completed in 2001 and the newly renovated center was renamed the Herschel Zale Child Care Center.

Herschel Zale – an innocent child whose life was ended tragically by disease, but whose memory continues to motivate others to help children in need.